It’s almost 2018, and I’ve been thinking about my goals for the new year.

Looking back on 2017, it was a pretty good year for my writing, definitely my most successful year so far, but I wasn’t very pleased with myself for only publishing two books in 2017 (Devil’s Island in February and my second short story collection Razorblade Dreams in October). Maybe I slacked off too much in 2017, but I plan to rectify that in 2018 – and I have already changed my writing habits and gotten a lot of writing done in the last few months.

In 2017, I put a dent in my reading list. In October 2016 I posted a list of the 100 greatest horror novels that I put together from various sources on the internet. You can find that list here: THE TOP ONE HUNDRED HORROR NOVELS OF ALL TIME After I posted that list, I realized that I’d only read 25 of those books, so I set out to read all of them over the next few years. From late 2016 until now I’ve read the following books in no particular order: The Rising by Brian Keene, At the Mountains of Madness by H.P. Lovecraft, The Totem by David Morrell, The Terror by Dan Simmons, Turn of the Screw by Henry James, The Cellar by Richard Laymon, Harvest Home by Thomas Tryon, and The Keep by F. Paul Wilson. All great books and I definitely recommend all of them even though I liked some better than others. Those weren’t the only books I read in 2017 (I read a few other great books), just the ones from the list.

For 2018 I hope to read at least six to eight more books from the list. Up next for me in no particular order are: Ghost Story by Peter Straub, Song of Kali by Dan Simmons, Psycho by Robert Bloch, The Choir of Ill Children by Tom Picirilli, The Ruins by Scott Smith, Dark Places by Gillian Flynn, and Frankenstein by Mary Shelly.

I’ve set some publishing goals for myself in 2018. My first book available in 2018 will be a suspense thriller called FOLLOWED; it should be on Amazon around the middle of January. Here’s the cover for it: 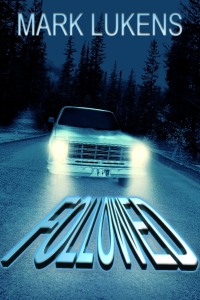 I’m also close to finishing the first draft of the third book (SKINWALKERS) in my Ancient Enemy series. I hope to have that one available by mid to late February. I’ve also been busy these last few months completing the first drafts of the first three books in my post-apocalyptic series that I’m really excited about. I’m hoping to have those available between early March and late May. I’ve begun the first draft to a sequel for my book SIGHTINGS and I’ve got the outline done for the second book in The Exorcist’s Apprentice series. I’m also working on four stand-alone horror and thriller novels.

If I get everything done that I want to, I should have ten books published in 2018. Don’t know if I can do it, but I’m going to try like hell. I hope you’ll stick with me through the year, and I hope you’ll be there next December when I post the year’s wrap up – we’ll see if I missed my goals, met them, or maybe even exceeded them.

As far as screenwriting goes, I’m still holding back on that. The financing for the film Sightings has never been able to come together, and it’s not looking like it will come together in the foreseeable future – but I still keep my fingers crossed. I do plan on reaching out to some people in the fall about some screenplays. We’ll see what happens.

And for my blog, I’m going to be much more active on it in 2018. I’ve already set up a schedule for the year. I’m going to bring back the Writing Tips that I used to post, one for each month beginning in January. I’m also going to promote more books at .99 cents each month. I’m also going to post my yearly best-of list in October for Halloween, and I’m pretty sure this best-of list will be the top 50 greatest horror authors, if I can narrow the list down that far.

Writing books for a living is a dream come true for me, and it’s all thanks to those of you who have read my books. I’m so grateful to all of you and all of the other readers out there, and I always remember that. Maybe I did slack off a little too much in 2017, but I’ve promised myself that I’m going to make up for it in 2018. And I hope you’ll be there with me.